Breakfast Creek to the Cox River in Summer

In January 2009 I took Darcy (9) on an overnight walk from Carlon's Farm to the Cox River and back. We went with my brother and nephew, and another family. I don't normally walk in mid-Summer in the Blue Mountains because it is too hot for me, which proved to be true once more. Both days were in the low 40s, and despite drinking lots of water I was down a kilo when I got home. 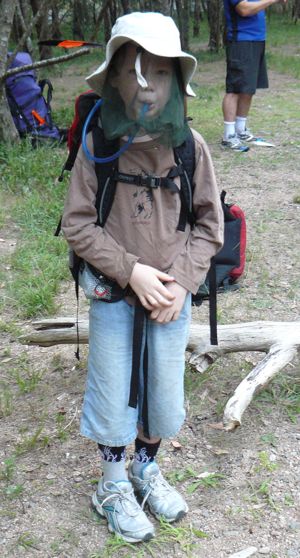 Darcy with Flynet and Hydration System 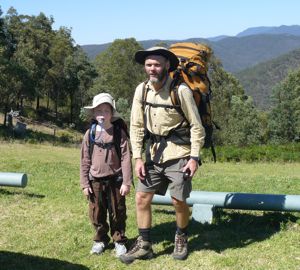 Darcy and me in the parking area above Carlon's Farm. The camera is looking South, with the descent down Creek Creek to Breakfast Creek in the background.

The last time I was on the Cox it was 1983, in the middle of a drought, and it was full of red-belly black snakes. That also proved to be true again. We parked at the old Carlon's Farm (now known as Green Gully). The "new" parking area is south of the farm, on the crest of Tinpot Ridge. The track down into Breakfast Creek is very easy to find, beginning as a broad, well-benched ex-farm road. When it reaches the bottom it is simple path. The damper sections at the bottom are infested with a horrible variety of introduced weeds, especially stinging nettles. Despite the heat Darcy and myself wore long pants and sleeves to keep the nettles off, but if I were to do it again I would wear gloves and carry clippers (is it illegal to kill exotic weeds in a National Park?). Darcy hated the nettles. Some people reckon the sting is mild, but I find it can return hours later and itch terribly.

While we resting we watched a large group of Red-tailed Black Cockatoos eating nuts in Casuarina (she-oak) trees. These birds are supposedly rare, but I have often seen them in Casuarina trees in the mountains. Nearby there was about a dozen of their feathers on the ground. While resting we also noticed that I had a leach on my neck - it must have dropped off a tree and down my collar. We were attacked by another leach the next day when walking out. We also saw several leaches swimming, one of which latched onto me in the Cox. These were a different species - longer, thinner, and with broader pale stripes. I suspect that they only live in the water. 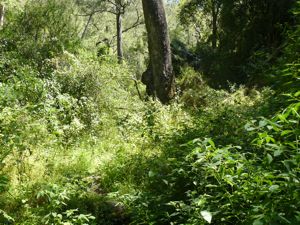 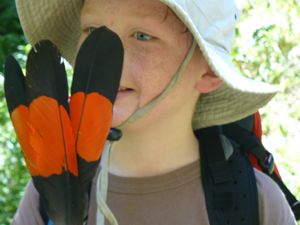 Breakfast Creek itself was rather dry. There were isolated pools of surprisingly good water, although some were a bit scummy. High water marks showed that these had recently been connected into pools up to 50m long, but we had not had much rain for a month. Even so, the water was good enough to drink after sterilisation. Quite a few of the pools had fish and yabbies (and leaches) in them. The yabbies were the brilliant blue ones, up to 20cm long. The fish appeared to be trout.

Darcy found Breakfast Creek to be heavy going due to the large irregular rocks. These are higher than a nine year old's knee, so they do make it difficult. They are square-sided metamorphic rocks, unlike the sandstone and occasional shale up on Tinpot Ridge. The walk crosses the edge of the Sydney Basin, which makes it interesting from a geological point of view. The dry bed - rocks without water - is reminiscent of a Japanese garden. The track continually crosses from side to side, and it is easy to lose it. Not that it matters that much, it is not possible to get lost. All that matters is that the going is a little easier on the track. 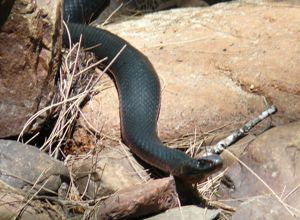 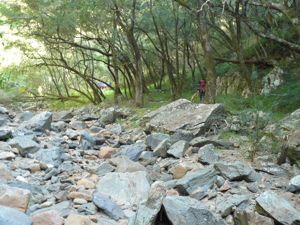 The Creek area was full of red-bellied black snakes, we saw at least five every day. These were all sunning themselves, and mostly did not feel that they needed to move. They are poisonous but don't make the top ten list, so you might not die if they bite you. We also saw several Lace Monitors in the Creek. These are large (2.5m) goannas. They were much more active than the black snakes, and would bolt off and climb a tree on our approach. It was only recently discovered that some species of goannas have low-grade poison. Both red-bellies and lace monitors these are very common in the Blue Mountains. 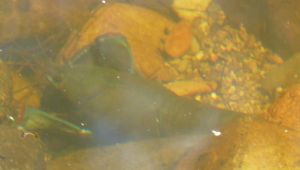 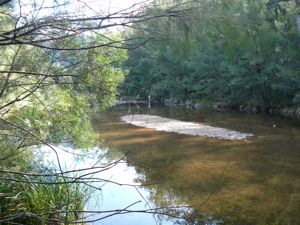 By this time were very tired, and it looked like the young ones would not have the energy to reach the Cox. We thought we would have to camp somewhere on Breakfast Creek, but unfortunately the pools of water were in the upper reaches, not down where we were. But we did reach there sometime after 4, very hot and running low on water. The Cox was flowing quite well, with deepish pools and rapids. Someone had built a small dam near the junction, so the pool was up to 2 metres deep. The rapids were rocky, but the bottom of the pools were sandy. The deep pools were wonderfully cool and managed to revive us. In fact the only reason I had gone on this walk was because we were going to camp on a swimmable river.

I spent sometime wading quietly through the deep water scanning the bank for Platypus holes. I did not find any, but I did spot a freshwater turtle in one deep pool. It was sitting on the bottom, not moving. I missed it on my first dive but eventually it settled on the bottom again and I was able to catch it on my second dive. After looking at it for a bit we let it go at the same spot. I am not sure which species it is, there are several species of freshwater turtles in NSW. 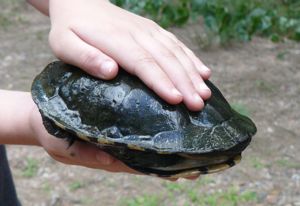 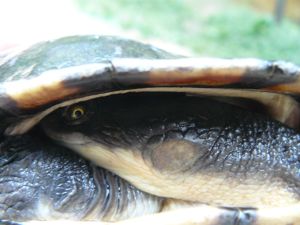 Eye of the Turtle

Our camp was a fairly typical for a mountains river - a sand bank mingled with large river stones, and river oaks (another species of Casuarina). The ground cover was trad - another noxious introduced weed. It did not cool off very much at night - there was no down-river air flow, and the sand retained its heat for several hours. So it was very difficult to sleep. I spent a lot of time watching the microbats flitting around eating insects. 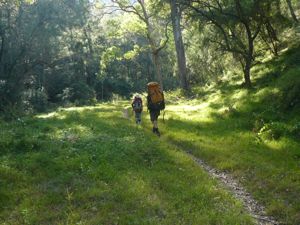 Next morning we left early, hoping to avoid doing the 600m climb out during the hottest part of the day - a rather vain hope. As usual it was easier walking back again, although we were attacked by the leaches again. The climb from Carlon's Creek back up Tinpot Ridge was a hard slog in 40+ heat, but the children coped with it remarkably well. Both Darcy and I used fly-nets to keep the bush flies off. I used to just put up with them, but after using fly-nets across the Simpson I have become weak.

Darcy's main memories of the walk are heat, nettles, rough terrain, and he views it as a test of survival. He was very glad that we had the river to swim in, but I don't think we will do any walks in the mountains in summer again.