At Easter 2007 I took my two boys (Rowan 10, Darcy 7), together with another father and daughter, on an overnight walk up Mount Solitary. This is an easy walk, in fact many people do it as a day walk from Katoomba, although they do not usually go all the way to Chinaman's Creek. I like this walk because it is not very hard (about 10km and 500m of climbing), but it has varied terrain and a sense of isolation at the destination - Mount Solitary is an isolated plateau ringed by 100m cliffs. It has a strong sense of place.

Mount Solitary, viewed from the Landslide. Knife Edge at right (Eastern) end, Chinaman's Creek is the first notch to the left of the Knife Edge. 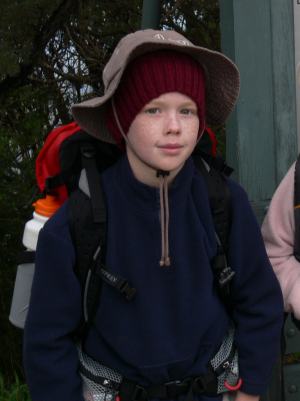 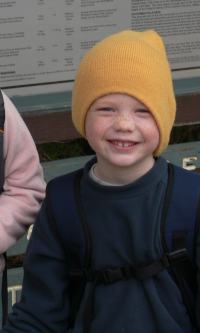 Rowan carried his sleeping bag, clothes and water; Darcy only carried his clothes and water. I carried everything else: all my gear, the 3-man tent, food, stove, Darcy's sleeping bag, and all the sleeping mats. In the end my pack weighed 18kg without water, 20kg with water - it was absolutely full. I had been on an overnight walk with just Rowan before, but carrying for two extra kids is the limit of my 70 litre pack. The most important thing when walking with children in the Blue mountains is that they must obey you when you say something is important - there are lots of cliffs that they can fall off. All children like to skylark, but you need to know that they will pay attention when you need them do so.

The weather had been touch and go all week, with showers in Sydney. Walking in the rain is no fun for kids. The bureau's weather radar had not shown much rain actually falling in the Blue Mountains. The forecast also showed the same pattern, rain on the coast but dry inland, so we decided to go. In the end the weather was very good - we had light rain Saturday night, and one small shower Sunday morning on the walk out. At the same time Leura (just across the valley) received quite heavy rain, so we were quite lucky. In any case, camping under the overhangs at Chinaman's Creek means that rain does not matter very much - you can still sit outside around the fire even if it is pouring. 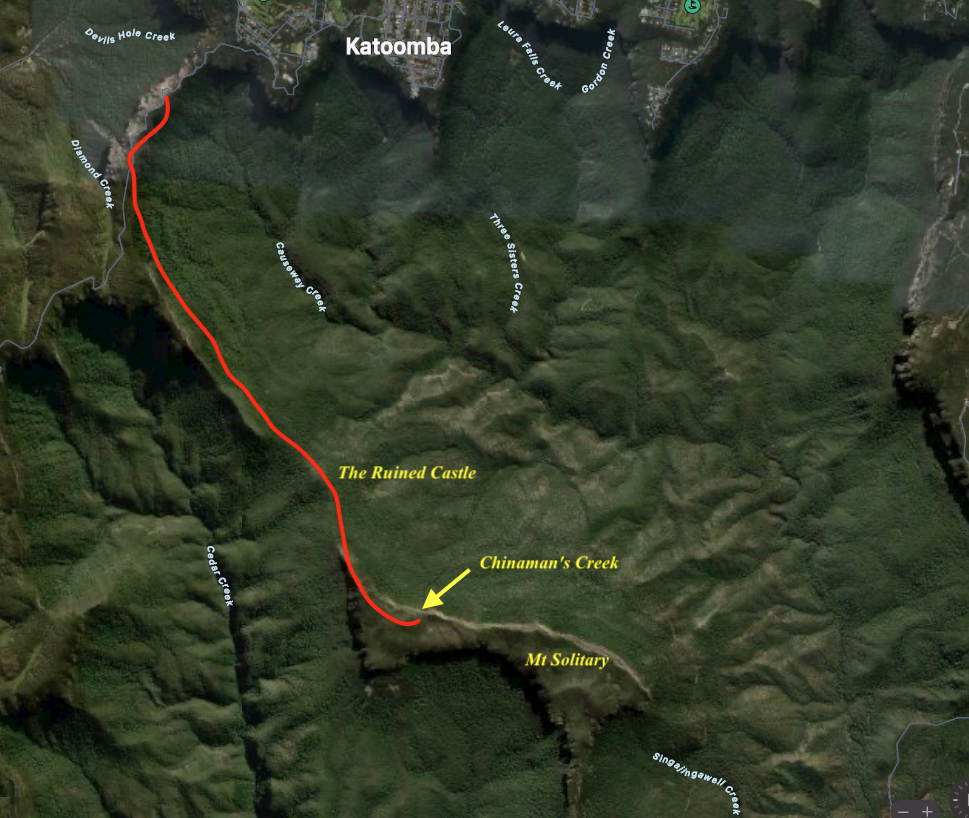 The map above comes from Google Maps. Katoomba is at the top (North), Mt Solitary is the strangely shaped plateau at the bottom center. The white splash on the South side of Mt Solitary is the path of a new landslide. Chinaman's creek is just to the right of that landslide. The route we took is (approximately) marked in red. The fire trail down Narrow Neck (and past the Golden Stairs) can be seen wiggling down the left side of the map.

We took the shortest route in via the Golden Stairs. This track starts from the gravel road on Narrow Neck and descends through the cliff line via ladders and (fenced) ledges. It is an old miner's track, used for access to the abandoned oil shale mines around the Ruined Castle. The sandstone steps have been gradually worn to the point where they are just a slippery slope, so it is not a good track if you are unsure of your footing. 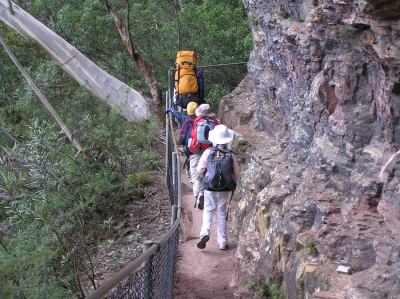 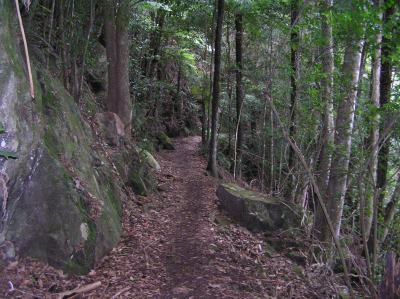 The track from the Landslide to the Ruined Castle.

The Golden Stairs track meets the main track about halfway between the landslides and the Ruined Castle. The main track at this point is the easiest track in the mountains - it is virtually dead flat, the rainforest leaves give it a cushiony feel, and yet it is a foot track, not a fire trail. The track is so flat because it is an old horse-drawn tram line that connected the Ruined Castle mines to the coal mines below Katoomba. The track alternates between rainforest and eucalyptus forest as is ducks into gullies and then out again onto the sunny ridges. Lyrebirds are very common.

There was a reasonable amount of water in the side creeks from Narrow Neck, although the old mine at the Ruined Castle was bone dry. In the 70's, 80's and 90's the mine always had water in it, even during the drought of the early 80's. However, the current drought seems to have dried it out, I have not seen any water in it for two years now. It is a long way from Katoomba so I don't think that private bores are to blame. The recent rain had no effect, it takes a long time for water to soak down through the sandstone. However, there were lots of mushrooms and other kinds of fungus along the walk. 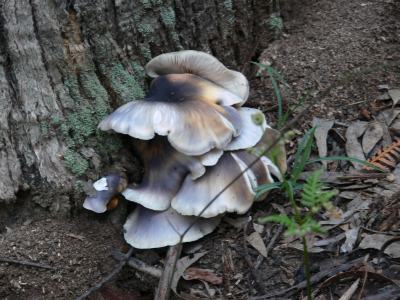 Fungus and termite waste in the rainforest.

The old tramway appears to stop at the old mine, although some maps show it continuing to Cedar Gap and then around to the South side of Solitary - I have seen no evidence on the ground of this. In any case the track past the old mine is no longer smooth and level, although it is still a very easy walk. The walk from the mine to Cedar Gap takes 15 minutes, at which point the climb begins.

The first hill is the longest and most demoralising because the track goes straight up and the top is visible right from the start - quite a long way away. There is a terrible amount of erosion, someone (but who?) should install steps and wire mesh to stabilise the ground. This was the hardest hill for the kids because it is long and boring.

After three hills the Knife Edge proper begins. It is steeper, but that is not so noticeable because it continually weaves between boulders. There is quite a steep drop on either side, but it does not feel very exposed due to the large number of trees, and because of the boulders that usually surround the track. There are two climbs that require a little thought, although they are not exposed. Kids don't seem to mind this part of the climb so much because the clambering is interesting and challenging. Some of the climbs are difficult for children and they need to be lifted up. The Knife Edge has one long flat section in the middle - flat as viewed from afar that is. The track itself goes up and down quite steeply in this section. The track is well marked, although you need to notice the switch from the right to the left side of the ridge near the end of the "flat" section.

We took our time and no one had any real problems. Eventually we reached the Casuarina (She Oak) forest at the top, where we met a party who were wondering where the track was. They must have come up South Col (i.e. the Western end). The top of Solitary narrows down dramatically at the Eastern end, and as you approach the top of the Knife Edge from on top of the mountain it is easy to believe that there can't possibly be a way down. We met some other parties of "older" walkers (i.e. older than us), who were most impressed with a seven-year old making it up the Knife Edge (although they noted the size of my pack). Anyway, the she oak forest was magical as usual. The rain had brought forth dozens of mushrooms. 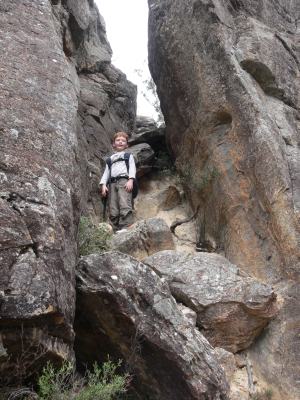 Darcy in the Difficult Crack 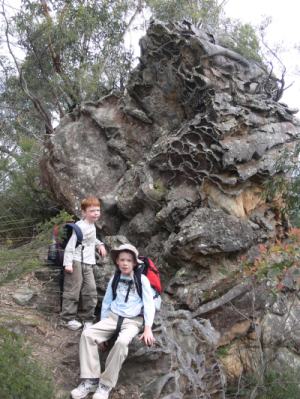 Resting on the Knife Edge

After the she oak forest there is a dry, stunted heath that rolls down into the tall eucalypt forest of Chinaman's Creek. The steep descent into Chinaman's always comes as a surprise, because everyone feels that the end of the Knife Edge must be the end of the walk.

Chinaman's Creek is the main campsite on the mountain because it has permanent water and three large overhangs for shelter from the rain. We were expecting rain so we camped in the second overhang at Chinaman's Creek - it appeared to have the largest sheltered floor space. The overhangs will not keep you dry if there is a strong wind.

There are views to the North and the South of Mt Solitary at Chinaman's. The Southern view (Melville's Lookout) is easier to reach and more spectacular. It can be found at the South-Eastern corner of the open-air camping area near the Southern cliffs. The Northern view is at the point where Chinaman's Creek drops off the North side. The creek is difficult to negotiate near the cliff face. As usual there was water in the right-hand (Eastern) side creek down near the cliff face, at the junction near the final campsite. Even after the recent rain the water was still tea-coloured and harboured some wrigglers. Evidence of high creek flows from rain was very visible so the pools must have been quite putrid before the rain. We could not get close to the cliff edges because they were too slippery. We did watch some Wedge Tail Eagles off the South side, and rainbows from the North side (the mountain is only about 400m wide at this point). 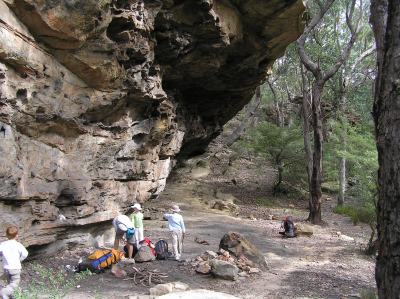 Camping in the Overhang 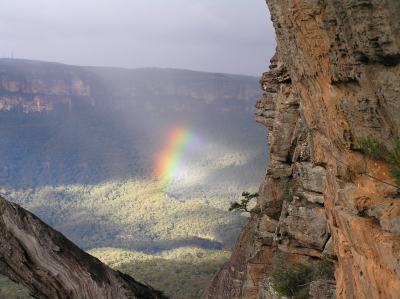 Rainbow, looking East from the Northern side.

It finally started to rain lightly late at night but that did not bother us. After the walk I was told that it had poured in Katoomba and Leura that day, but fortunately all we had seen was overcast.

The morning was solid overcast and fog - we were inside the clouds. In the morning we left at about 9 and slogged up the hill back to the Knife Edge. This hill always hurts, because muscles are stiff from the day before and not yet warmed up. The climb down the Knife Edge was interesting because we climbed down through the cloud and then into open air. At one point we were looking down through fog into bright-lit forest, a very strange effect. We had a tiny bit of rain on the way back through the rain forest, which brought out the leaches. I was surprised to see them because I thought the drought would have killed off almost all of them. They did not get any of our blood. 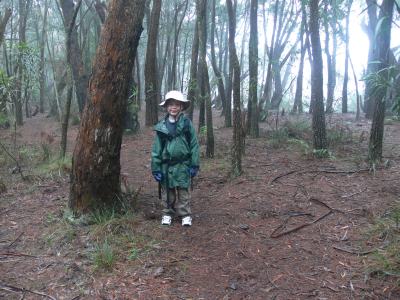 Darcy in the Magical She-Oak Forest

We came out via the Scenic Railway rather than climb up the Golden Stairs. This adds about 3km to the trip, but avoids the climb up through the cliff. Besides, (most) children like the ride up the seemingly vertical railway. We therefore crossed the old landslides to reach the railway. The talus slope of one landslide is still actively moving so the track wanders up and down over some rough terrain, although it is not dangerous.

The walk was a big success, despite the potentially bad weather. As usual the children rose to the occasion, probably because the bush is so interesting, and because they are doing something really special. It helps to point out little things along the way, like mushrooms, strange vines, tiny springs, old mining adits, leeches etc. The camping is easy due to the overhangs, although the water supply is marginal. The track is very easy to follow, and the section from the landslides to the Ruined Castle is especially easy. Both Darcy and Rowan like the Knife Edge above everything else, because of all the climbing over rocks. They did not like brown water with wrigglers, or the lack of toilets, or leeches.

We did the walk two weeks before the much longer Mittagong to Katoomba walk, so the Solitary walk was a useful warm-up.